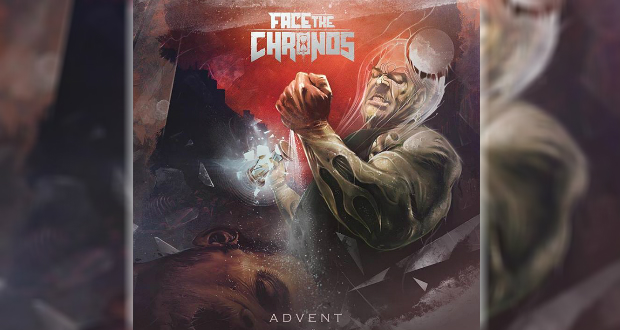 Face The Chronos, the Russian progressive metalcore band from Moscow, have released their debut album Advent. Let’s delve into this review.

For a debut album, this is bloody impressive. This feels like an eloquently planned and constructed album, not one that has been rushed together so they have some ‘merch’ to sell at their next pub gig. You get the immediate impression that the band has already honed their craft through extensive gigging and rehearsals. This skill set has then been brought to the recording table.

As I previously eluded to, Face The Chronos are a progressive metalcore band. However, this is no ordinary progressive metalcore. This is an M&S progressive metalcore. The five-piece integrate in some deathcore chugs into their nine-track album, providing a darker, more aggressive onslaught to the audiences’ cochlea’s. A constant growl throughout Advent is maintained from the front man Artyom Pushkin, vocalizing his lyrical concepts of each of the nine songs, which seemed to be based on the deadliest of the sins; such as murder and greed that nicely ties into the band’s name. ‘Chronos’ it is believed, was the ancient God of Time who studied mankind and grew an ever-greater distain for them as he witnessed their sinful natures and patterns play out in front of him. This eventually turned the ancient God into such a rage that he, ironically, destroyed the world leaving a path for new beginnings and a fresh legend to appear.

Here is a video to the opening track ‘The Dark Court‘;

Guitarist’s Leo Zhdanko and Maxim Zimakov provide a diverse and ever-changing melodical approach to their playing from clean opening to ‘The Dark Court’ to the heavier chugs of ‘The Feast’, giving each song a very unique feel and texture. This keeps your interest and feeds the narratives of the album perfectly.

Face The Chronos have kept Advent to a short and concise thirty-four minute duration, meaning only a few songs come near, or over, the four minute mark and yet you’re not left feeling you have missed out. These tracks are rammed full of variation and content. There’s no excess fat and this, as previously stated, makes the album feel very well constructed – any more would be wasteful.

But Rich, what if I don’t have a spare thirty four minutes in my day? Well I would highly suggest checking out the fifth track; ‘New Babilon’s Builders’. It’s less than three minutes long and will give you an intensive feel into this groups’ capabilities. Advent is out now.