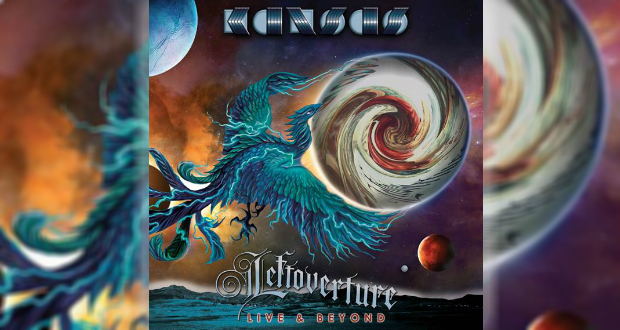 Kansas made their name as one of the mainstays of the 70’s and 80’s AOR genre, alongside bands like REO Speedwagon and Foreigner. They’re classed as a classic rock band but the music they play is far too complex for such a description, as the music on this album stands testament. Largely unknown in the UK outside of the rock world, many who know them only do through their two classic, well-known songs, ‘Dust in The Wind’ and ‘Carry On’, My Wayward Son’. But, this album should go some way to reaffirming they’re about so much more than just these two songs.

After several years where they’ve lain fallow, they’ve suddenly discovered a rich vein of creativity after some line-up changes. Following on from their 2016 studio album The Prelude Implicit (their first in 16 years) comes another ‘live’ offering Leftoverture; ‘live’ and beyond. This is a two CD album, the first with tracks from their latest album plus a few older classics, and the second disc reprises their 1976 album, Leftoverture. All eight tracks on that album are performed here to an audience that clearly enjoyed what it heard.

One thing about Kansas is, the longer the tracks they perform, the more Prog-like they become. Shorter tracks like ‘What’s on my mind’ and ‘Questions of My Childhood’ are straight ahead classic rock, but when they perform tracks with quite complex time signatures and key changes, such as ‘Icarus’ (born on wings of steel) and ‘Journey from Mariabronn’, they venture into prog land with some epic playing and some stellar violin from David Ragsdale, giving them the feel of a male-fronted Curved Air. Similarly, on ‘Voyage of Eight-Eighteen’, there’s some delightful interplay between guitar and violin, and this is one of the standout tracks on the album. They can also rock as well, ‘Rhythm of The Spirit’ ups the pace somewhat with a full-out rocker, one of the bands heavier songs. Musically, all through the album, Kansas are tight, in control and they play some challenging music with aplomb. This album is quite likely the best the band could hope to produce at this stage of their forty-year career, and for their fans it’s probably an essential purchase as your chances of ever seeing them play in the UK are gradually ebbing away.

Listening to this album reminded me what I sadly missed in July 2017 when Kansas had a headlining spot at Ramblin’ Man but wimped out, citing State Department concerns about terrorism as the reason not to fly. Not that this stopped ZZ Top, Y&T and several other American acts from performing there.