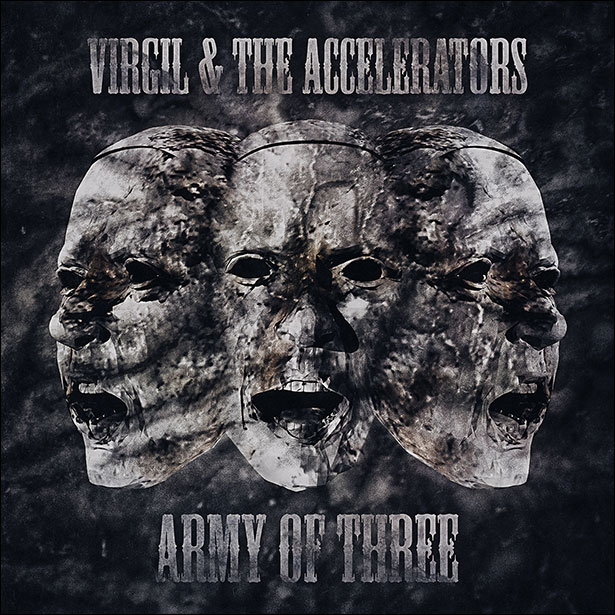 Blues rock’s not been the sole exclusivity for those with receding hairlines reminiscing over Cream reunions and Rory Gallagher reissues for some time. The last ten years or so have found resurgence in the form with young gunslingers playing at venues and festivals to sizeable crowds, not least in the form of female admirers. The way they gather in groups and giggle over those hot bods thrusting their wailing six strings between their legs may be the musical equivalent of a strip show initially, but they don’t buy the records if they don’t like the music too.

Virgil & The Accelerators have been among the beneficiaries of this fact. Featuring the brothers McMahon, born in South Africa and now residing in Birmingham of all places; Virgil is front man and axe hero (having been voted Best Guitarist 2013 in the European Blues Awards), younger sibling Gabriel likes giving his drum kit a pummeling, while bass player Jack Alexander Timmis keeps it on an even keel, shifting rhythms in an understated manner. On Three Man Army, their second studio album produced by Chris Tsangarides (Thin Lizzy, Judas Priest etc), they’ve added harmonica, some keyboard fills, alongside the odd studio effect.

It was the full-on raunch of radio hit ‘Backstabber’ that first had me listening out for the band, and catching them live I could see they knew how to expand that sound accordingly. ‘Army of Three’ sees them stretching their horizons further, but curiously so; because aside from taking that 70s rock band sound as their template they also appear to be going in for that decade’s career game plan: record an album that will get you on the bill of a tour in the American mid-west and gravitate upwards in popularity accordingly. The results of which have the tracks falling into two broad camps – longer ones where they can extemporise à la Traffic/Blind Faith/Fleetwood Mac and others with a more hard rock flavour akin to early Kiss and Rick Derringer, on occasion you get both in the same song, and all with a more frenetic guitar approach over those well-worn pentatonic scales. Is this authentic blues? It is what it is, and music evolves with the times.

‘Take Me Higher’ opens likes a mission statement, evoking the senses to picture tumbleweed trundling across a Wild West prairie before a staunch rock rooted song sets its mark, and Virgil sings about looking to new horizons and the opportunities that may ensue. Its sets the bar high as it extends instrumentally.

Less existentially, with no regrets for recent deeds done, ‘Blow To The Head’ is more riff rock as drums crash and a rhythm and lead guitar buzz in collectively before entering into an instrumental akin to Thin Lizzy’s ‘Emerald’. That Kiss meets Rick Derringer predilection first rears its head on the rock ‘n’ roll of ‘Give It Up’ that goes on a little too long not least with its repeat of the title being chanted in anthem but features cool bluesy harmonica bursts and the kind of guitar solo that was inspired by the type Clapton put out before swapping his black Les Paul for a Fender. Virgil McMahon has a good not great voice that works well within the band’s framework aided by the fact his diction is very good. It’s pitched somewhere between Peter Green and Scott Walker’s in its phrasing, but on ‘Stand Up’ has him effecting Paul Stanley vocal mannerisms well over some double entendre lyrics, while pulling in a scribbly-noted little solo.

But the best of the rockers is the album’s oddball ‘All Night Long’ – It’s a gloriously gonzoid glam metal fusion of Silverhead meets Supergrass with a cowbell knocking throughout an infectious rock ’n’ roll riff that’s catchy as all Hell. With lines like “You can’t trust a women when she’s out on her own,” it cruises precariously between misogyny and female empowerment. It features a frenzied neck-wringing guitar solo with a theremin or synthesiser in there for good measure as drums attempt to punch your speakers out before returning to the main song and is apparently about to be released as a video single.

Another album highlight is ‘Love Aggression’. Over a rock steady beat with chiming guitars, the softly uttered vocal tones about a love affair going wrong will have many a young lady listening to this and believing they can mend poor Virgil’s broken heart. As it develops there are some classic 60s pop chords at play, with melodies and vocal hook lines too before a bitter sweet guitar solo comes in that gets frothy then melancholy before the song takes on a slow reggae/Traffic-goes-African beat rhythm before returning to its main theme. ‘Through The Night’ follows in a similar vein, but less effectively, being more British AOR meets The Police.

Elsewhere ‘It Burns’ is almost a bluesy homage to Black Sabbath and ‘Anymore’ begins slowly, its blues theme morphing into a part psychedelic sub-blue rock glow, slowing down again half-way through way as Timmis’ bass nudges it along nicely, then concluding with both bottleneck and fingered guitar solos in tandem reminiscent of Fleetwood Mac’s ‘Albatross’ as the chorus gets repeated in mantra.

The album is bookended by ‘Free’, a sad guitar refrain intro moving from Traffic/Blind Faith/Derek mode to a Derek & The Dominoes/Black Crowes Southern rock state of play that basks in sun with goodwill written all over it, and another one where the girls will think they’re the answer to Virgil’s ailing love life. Again, the guitarist taps into Clapton as the key to the highway towards his own modernistic fretboard frenzy. A fitting end to Army of Three with a song that’s like to be even more powerful live.

There are some killer tracks on here, but it’s an album that’s not an immediate hit throughout and takes some listening to take in what the band were trying to achieve. It doesn’t always work, but a good percentage does and I daresay those will be the ones featured on their current UK tour.