Thy Art Is Murder @ The Joiners, Southampton 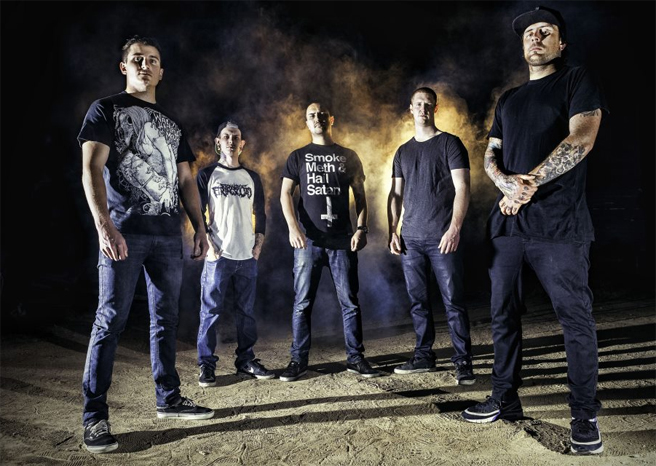 Love them or hate them, there’s no way you can scoff at Thy Art Is Murder. The Australian crew have made impressions all over the world with only their second album, the recently released Hate and it’s hard to say there hasn’t been a month where these guys aren’t doing something spectacular. And despite numerous UK visits in recent times, TAIM have graced our shores once more to give fans another dealing of their ferociously heavy deathcore goodness.

Openers Aegaeon clearly make a good first impression on the crowd; there’s a huge amount of energy in their set and a pit forms from the very first song. They draw a warm response from the main bulk audience who are drawn in by the adrenaline of their songs. However, later in their set, there’s little change in their performance leading their set to become a little stale on the eyes as the band don’t provide too much of a sensational visual aspect. Nonetheless they do give an adequately entertaining show which makes for a good warm up on the more energetic members of tonight’s crowd.

Aversions Crown pick up the show with a more suspenseful opener which kicks straight into a powerful first track. Much in contrast to the previous set, the whole band contributes to the performance; never allowing the stage to seem still for even a second. This charisma is clearly picked up on by the crowd who give a roaring response to the band’s audience interaction. They inspire some intense moshpits and huge unison headbangs which spread across the entire room, exercising their complete control over the crowd brought on by their inspiring performance.

Sub-headliners Heart Of A Coward had only performed in Southampton a few months before on their own headlining tour, but tonight’s crowd seem happy to welcome them back. The band blasts the audience with a really heavy opener, wasting no time in beginning their set. Vocalist Jamie Graham sounds particularly fantastic and shows a huge amount of experience in his ability to keep a strong hold on the audience even during technical problems for which he displays his brilliant sense of humour to keep the crowd on board. But credit is also due to the rest of the band who display enormous passion in their performance, constantly moving about the stage and to the music and getting as involved in the crowd as their frontman. Tonight’s audience are surely battered by the end of their set but are clearly more than satisfied with Heart Of A Coward’s set.

Thy Art Is Murder arrive on stage to a beaten but excited audience by the time their set is due. However as soon as those distinctive drums kick in the crowd are once again moving around nonstop. Strangely, lead vocalist CJ McMahon opts to wear a black hoodie onstage for the first few songs which does cut off the connection between him and the crowd temporarily since no one can really see his face. However the hoodie is shed after a few songs and the band continue into an intensely heavy set. As impossible as it may seem, Thy Art Is Murder’s tracks double in hard-hitting heaviness and intensity when performed live. And this seems to be working with the audience, from which even the youngest members are climbing onstage for a stage dive. The band keep up the energy in their set even through what they describe as ‘the hottest show of the tour’ finishing with a shatteringly heavy rendition of Reign In Darkness.