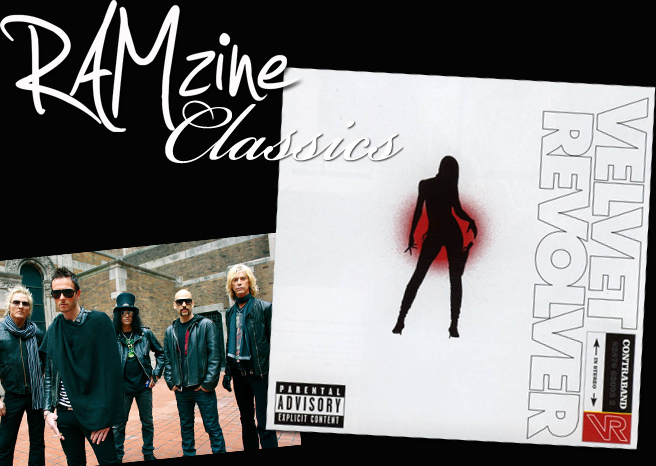 The supergroup. Some believe the term is a kiss of death before the band in question even gets off the ground. This was not the case with Velvet Revolver, the group comprised of ex-Guns N Roses and Stone Temple Pilots members. With Scott Weiland on vocals, Slash and Dave Kushner on guitar, Duff McKagan on bass and Matt Sorum on drums, the band really created that classic LA rock and roll sound, yet with a dark modern twist. This is shown on their debut masterpiece: 2004’s “Contraband”.

The album opens up with “Sucker Train Blues”, and is a jolt of pure rock and roll adrenalin straight to the heart. Slash’s signature guitar riff, along with Duff’s rolling bass and Matt Sorum’s crisp, effective drums makes for a wonderful combination. However, Weiland’s signature snarling vocals really add an extra dimension to the sound. He has a good vocal range, however it’s the delivery which makes his vocal style so special. He snarls every world and makes sure you know he means every line. Slash’s guitar solo is simply face melting, and this song is probably one of the best album openers ever.

Next up is “Do It For The Kids”, which follows in the same vein. This song has much more groove, and Weiland’s vocals really paint a picture of the debauched life in LA. Again the riff holds true during the verse, however it is the vocal harmony in the chorus which catches the ear. It’s a relatively simple vocal line, however it is performed to perfection. The mid-section before the solo is also very pleasing to the ear, with the melodies interweaving perfercly and creating the perfect platform for the solo to come out of.

Following on is “Big Machine”, a song built on a fantastically simple drum pattern from Sorum, and Duff’s precise bassline. The groove created is just toe tapping and goes perfectly with the song’s subject; a real pot-shot at the music industry and the people within it who take their privileged life for granted. The chorus is just stomping, and once again as the song closes, Slash wails away on that Gibson Les Paul as he always does, with aplomb in that signature style.

Up next is “Illegal I Song”, a song that is built on crushing drums and battering guitars. This song for the main part is just so heavy, it sounds like Metallica raised on a diet of Guns N Roses. Weiland’s sneering vocal style is back with vengeance here, powering over the wall of guitars and rhythm. The chorus is a varied departure, with an almost Latin style drum patter underpinning another simple vocal melody. Velvet had so much variety in their song on this album; they were able to bring influences from other styles of music and still sound so rock and roll.

Next up is “Spectacle”. This song flies along at a furious pace, and the lyrics referring illicit encounters on the Sunset Strip really make you wish you were back in the hedonistic 80s, rocking out with a bottle of Jack and not a care in the world. The chord pattern is relatively simple here, yet the drums change the tempo of the song all the way through. Sorum’s feel for how to bring the melody out in the song with his drum patterns is simply unparalleled, and is why he has become
such a big inspiration to so many drummers. 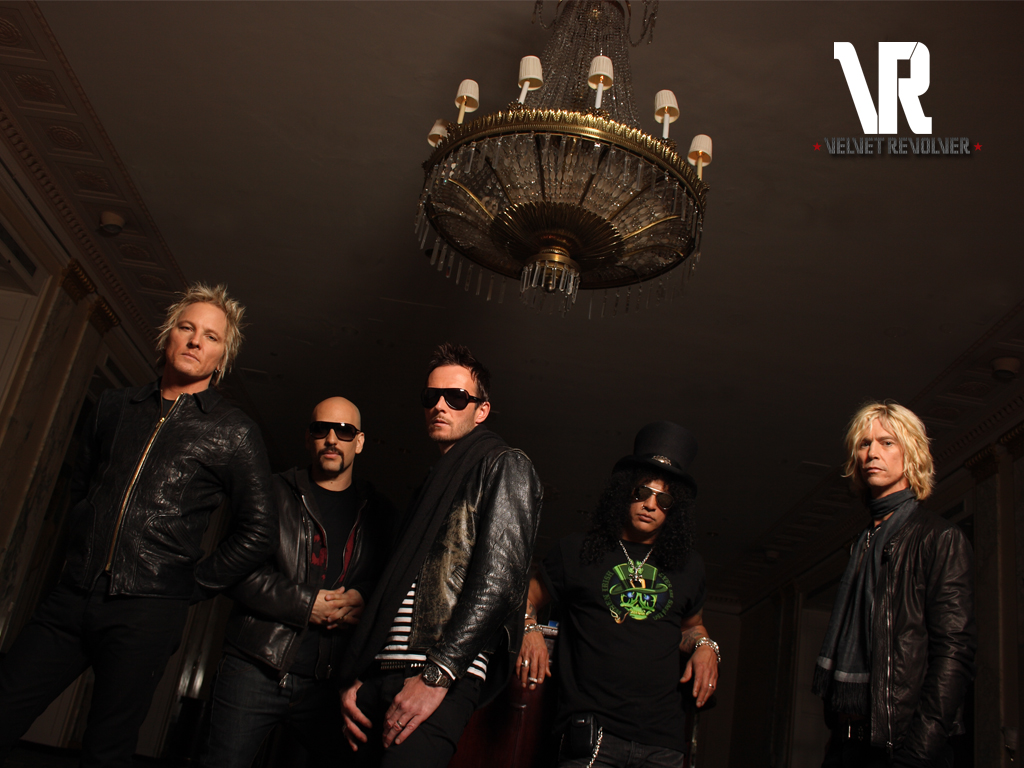 Following on from this is the album’s first ballad, the heart-wrenching “Fall to Pieces”. This song is so pure and the guitar tone created is simply astounding. Weiland’s honest lyrics are felt in every fibre of the listener’s body and there’s a serious empathy created between singer and audience. This vibe is not created lightly and shows that this is clearly one of the best rock ballads of all time. When the guitar solo kicks in, absolute chills went down my spine. Slash elicits actual emotions from his Les Paul and each note is crying out like a voice, just yearning to be heard amongst the rest. This is a genuine highlight of the album, and a song which shows the other, more emotional side of Velvet Revolver.

The album kicks back into rock overdrive again with “Headspace”, a song which possesses one of the best riffs on the album. The flowing layered melodies on this song during the two chorus part, and especially through the bridge in the middle really show a massively musical side to the band; they always play the perfect pattern for the song. This is a really underrated track on the album and one which could have easily been a single.

Up next is “Superhuman”, which refers to that feeling where anyone can feel on top of the world when they’re partying. The bluesy feel to this song reflects the debauched subject matter perfectly. The wailing guitar over the main riff creates a great layered guitar sound and Weiland’s vocals sneer their way through the song, with attitude and rock and roll swagger, like a younger more edgy Mick Jagger.

Following this is “Set Me Free”, one of VR’s best known songs. The guitar riff is classic rock and roll and the pounding bass and snare drum intro carries the song into the main riff section. The bass and drum-powered verse is a vehicle for Weiland’s baritone vocal range and sounds simply unnerving, yet uplifting. The chorus is just a sing-a-long masterpiece which gets stuck in the listener’s head for days. One of the best songs on the album by far.

Next up is “You Got No Right”, an acoustic led track that once again shows VR’s versatility and Weiland’s fantastic voice. He almost sounds like David Bowie here, with his voice showing real haunting qualities. This chilling track is simply beautiful and soulful, and adds sheer variety to an album that is pretty much perfect. When the drums kick in, the vocals seem to have an extra bouncy groove and this song takes on a wonderfully funky dimension.

Up next is “Slither”, which once again kicks into the rock dimension. This is the band’s signature song, and was their first single from this album. It is a classic sleazy rock tune, with heavy drums, a rocking guitar riff and a catchy vocal hook. Perfection for the rock masses. However, there are some subtle nuances; the way Sorum uses open hi-hats every now and then to create an offbeat feel under the riff is brilliant. Slash’s solo again is just shredding, he seems to have become a better guitar player with age. This song is a rock classic, and cements the album is truly great.

Following this is “Dirty Little Thing”, which brings back the sheer sleaze of earlier in the album. Weiland’s snarl blasts from the speakers, and combines with Slash’s guitar tone to devastating effect. The way this song keeps changing tempos from full speed to half-time is genius; it almost feels as if they’re two songs in one, yet the two parts sound so together. A brilliant track that was a sure-fire successful single.

Closing the album is another ballad which is acoustic led: “Loving the Alien”. This is the perfect album closer. The band are right together and have created a beautiful chorus to sing along to. This song feels like home; the album feels like it is coming to a natural end, and you’ve got all your friends around you experiencing it, even if they’re not there. It is very rare a song can elicit such emotions from a listener, which is testament to its power.

In closing, this album is simply perfect. There is not a bad track on it, which is so rare to find. I’d recommend this album to anyone who likes music loud, yet dynamically thoughtful at times. The attitude through the album is so uncompromising; it is the sound of five guys making the music they love. That, we can all relate to.