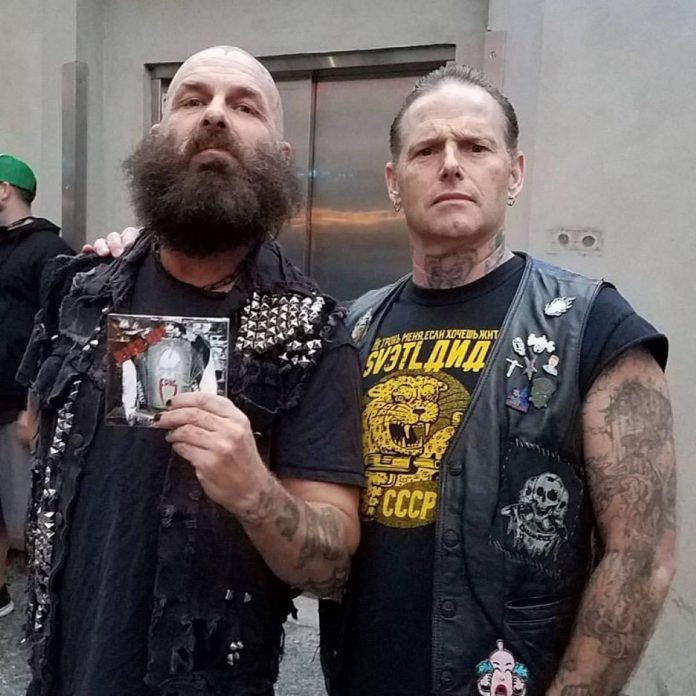 One of the most enduring and productive hardcore bands ever, Fang got together back in 1980. This influential San Francisco Bay Area/Long Beach based band, has been influential and much covered by the likes Mudhoney, The Butthole Surfers, Metallica, Nirvana and Green Day.

Five years after forming, Fang relocated to Europe, at first living in England but finally settling in Bremen, West Germany. In Bremen at the time, there was a war going on between punk rockers and Nazi skinheads, and original front man/vocalist Sam McBride (aka Sammytown) was invited to join a street gang called The Outsiders.

“We would regularly fight the Nazis and sometimes the cops,” he recalled, going on to explain how it lead to Fang‘s Spun Helga album that has just been released digitally for the first time, on Die Laughing Records.

“The first song on Spun Helga, ‘Tits and Oi’, is calling out all the fascists and their sick mentality.  It was the 80s so the ever-present fear of a nuclear war rears its ugly head in ‘Dr. Eugene Scott’ (a bizarre televangelist) and as it was in Germany there was a lot of drinking and partying (Tequila).

“While we were living in Germany, a friend of mine, Lyon Wong from Tales of Terror was killed in a street fight in Sacramento which inspired the song ‘Honor Among Thieves’. Everyone either loved or hated Madonna so we closed out the record with our choral tribute to her. The doorway we opened between Bremen and Oakland is still alive today and many bands were able to follow in our footsteps to Germany and beyond. The record was released in 1986 by the now long defunct National Trust Records in the US and We Bite Records in Europe. The cover art on the US release is by outsider artist Joe Coleman.’’

With a current line-up still featuring Sammytown, alongside Tommy Knox and  Obadiah Bowling on guitars, bass player Brandon Brown and drummer Mike 86, the band was profiled in the documentary Turn It Around: The Story of East Bay Punk, and last year released a new single and video, titled ‘Minneapolis‘.

Talking about that single, Sammytown said: “On Thursday May 28th, 2020 the 3rd precinct of the Minneapolis police dept. was set on fire and burned by protesters following the murder of George Floyd by Minneapolis cops. This and many other recent and historic events are the impetus for the new Fang song ‘Minneapolis’.

“There is, and has been, a war going on for far too long in America and every citizen, every person with a voice and a body needs to rise up and join the fight. This song is a call to arms and a condemnation of the diseased history of the United States and the continued systemic racism that exists.”

You can stream/buy ‘Minneapolis’ here and check out the video for it right here at RAMzine.

Fang‘s previous studio album Rise Up! came out in 2019, while Die Laughing Records has also made 1998’s American Nightmare available digitally for the first time.

“1996. After spending seven years in some of the worst prisons in the USA, for a horrible crime, I was released onto the streets a changed man,” recalled the band’s singer. “I had not planned on ever getting Fang back together but with the urging of many and a longing to make music again I rebuilt Fang in 1997 with Josh Levine (Bass), Greg Langston (Drums) and Bill Burnett (Guitar).

“American Nightmare is the culmination of that rebirth. Most of the lyrics on the record were written while I was still incarcerated. It is a window into the past, a window into the California penal system and the violence and brutality of the CDC with songs like ‘Electric Chair’ and ‘City of Pain’. It is also a Fang record in that there are moments of pure sarcasm ie; ‘Eat a Vegan’ and ‘Motor City Drag Queen’. As well as a hard look at the punk rock scene in the city of Sacramento and the war that was raging there at the time – ‘Pride’.

“American Nightmare was slated to be released in 1998 but Wingnut records closed their doors forever and all the records, CDs and cassettes were locked away in storage for many years. With mind blowing cover art by Joe Coleman and incredible production and engineering by Jason Carmer. It was sad that the record never really saw the light of day…. Until now.’’

You can stream/buy American Nightmare here.