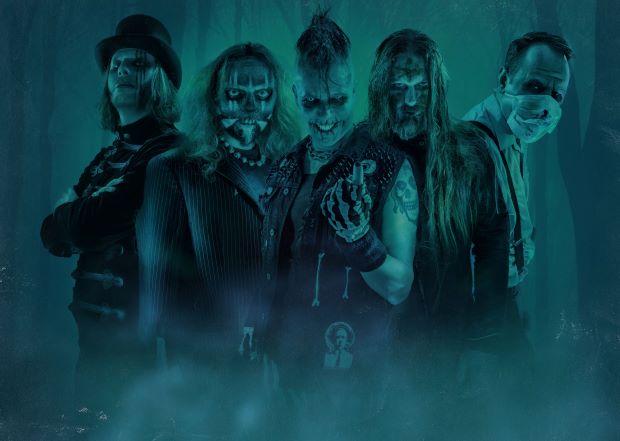 German horror punks The Other are back, and still under the spell of monsters, outsiders, serial killers, apparitions, nightmares and creatures stitched together in secret laboratories! They have released new single ‘We’re All Dead‘, the first track taken from upcoming album Haunted, to be released on 12th June through Drakkar Entertainment.

On Haunted, however, terror and shock come in a different guise. According to Rod Usher, the very figurehead of horror itself: Album eight courtesy of his undead army is their most personal effort yet. And their most painful, at that. “I killed quite a number of women in these lyrics,” he groaned. “It’s the necessary artistic closure of a crushing experience and a huge disappointment.”

Then again, The Other didn’t abandon their horror punk frenzy, these particular songs wherein Revenant Rod Usher and his cast of zombies immortalise girls with rather long fangs, to name just one example. One of their trademarks still are those morbidly entertaining world-coming-down anthems about the things hiding under our beds while we stir in disturbing dreams.

More than ever before, however, The Other dive deep into the worst horror of them all: the human psyche. Maybe that’s because The Other turned 18 this year, marking legal age in Germany. Or it’s because former bass player Aaron Thorn has re-entered the covenant? Both, possibly.

“I totally forgot how much fun you can have with him,” Usher said regarding Thorn’s return. “The moment we’re hanging around, we’re irrational teenagers again.” That’s especially true with regard to their hot-blooded live antics. After releasing Casket Case in 2017, they have been successfully touring Germany and played diverse festivals.

Alongside vocalist Rod Usher and bass player Aaron Torn in The Other are guitarists Ben Crowe and Pat Laveau, and drummer Dr. Caligari, and for them Haunted is somewhat a watershed. A milestone equalling, We Are Who We Eat that will significantly influence the years to come.

“It’s the classic paradox,” the vocalist laughed. “We’ve taken one step forward while looking back. New pathways and old roots combined. We wanted to experiment a bit less in favour of highlighting the very trademarks of our sound.

“I really cherish the fact that this made us darker and more atmospheric.” Make no mistake, this is still horror rock at its purest. It just doesn’t need plastic skeletons and theatrical blood anymore. Not less scary, only less stereotype, think more The Damned or The Cult and less The Misfits.

This is another era for the band that also becomes apparent in the latest band pictures: Horror redefined, less gesture and more content. Much like Lovecraft who indeed managed to squeeze unspeakable dread in-between his lines. Or indeed much like our world right now, where a simple look out of the window equals binge-watching an entire collection of horror movies.

In parts, Haunted still is a good old horror story, disemboweling some of their earliest works. Usher grinned maliciously: “Of course there have to be songs like ‘1408 & 2717’, telling old-school horror stories in the archetypal way.”