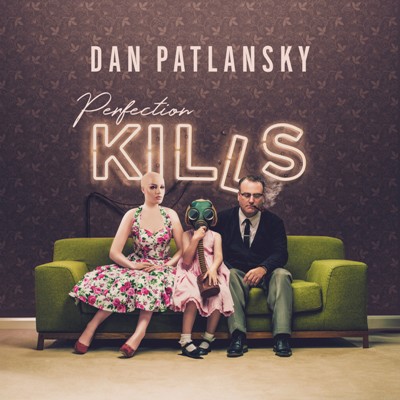 The pursuit of perfection can be dangerous. Not only can it stiffle creativity it can eradicate the natural beauty that’s already there in favour of a pre-fabricated reality. A sign for our times, the fashion of our modern disposability clique where we reinvent our values to suit our mood.  Dan Patlansky claims the concept behind his brand new album, Perfection Kills, was one of “Why try to be perfect?” Since there is no yardstick to measure it by, how can you now you’ve achieved it anyway?

However, the fact remains that the previous two albums released by this South African singer-songwriter and guitarist (and it’s worth keeping all those taglines in mind as we proceed, while adding in troubadour for good measure) have seen his credibility, status, and talent rise significantly. It’s live we appreciate his fiery six string most, but they’re on record too, in service to the songs and it’s those that we’ve been listening too in a voice that draws us in and has us believing or sympathising with the things he has to say. His albums in that manner, while ostensibly of the classic rock, blues rock categories have genuine mainstream appeal. You could only see the process extend accordingly, and producer Theo Crous played a big part in achieving that.

Now Patlansky has opted to concentrate on the songs themselves rather than refine the way they end up sounding. Less studio work intending to produce a more “real and organic result”. Fair enough, but he wisely did pre-production work with Crous before going off on his own. What I believe Patlansky has done in fact is take a hard look at what life really means to him. He’s had a new son, and that’s naturally made him linger to be home more, with Perfection Kills being recorded in Pretoria.

Being surrounded by those he loves and cares for, from family and friends to a homeland that’s still got a lot more natural beauty than most industrialised or skyscraper infested cities has presumably made him value his home comforts imperfections all the more, and many of the songs recorded reflect that, most notably ‘My Dear Boy’ and ‘Never Long Enough’. But because of that pride and paternal need to protect there’s also a more pronounced outlet for his anger and frustrations at the modern world to be heard on songs like ‘Mayday’ and ‘Too Far Gone’.

So the song’s narratives have changed, how so the music? Well, they’re still of a hard-hitching funky rock mode for the most part, guitar solos may have a few more clever nuances left in than might’ve been left out to give a more direct sound previously and the voice has become a lot gruffer – Whether that’s age or a less polished/smoothed over production  I don’t know, but the deep intonation of his voice has always been a formidable weapon because we instinctively listen to such timbres with more respect, as if they’re more worldly, honest, and have if not wisdom then at least home truths to deliver, now it’s more so.

Think singers such as Howlin’ Wolf, Paul Rogers and Jimmy Barnes. Voices that fellow men will happily buy a drink for and that women may find appealing for a suitable reliability felt present in their laidback machismo. That there was something more metrosexual about Dan Patlansky suited our times, now more rugged vocally it’s like he’s been out back cutting wood to keep the family warm, now inside around the fire he’s here to tell those about him about his adventures out in the big bad world beyond. So let’s listen.

Broken chords give way to brash rock intercut with mellow “Whoah-Whoas” for opening number ‘Johnny’. It ruts and grooves with a raw guitar sound that comes out screaming when Patlansky. About a kid surviving a tough upbringing, there’s a work song 4/4 beat underpinning it, so much so that you could whistle Frankie Lane’s ‘Rawhide’ alongside and it wouldn’t sound completely out of place.  Whether social observation or personal anecdote turned into third person narrative we don’t know but it’s a strong ragged opening rock tune.

Such angry numbers are targeted to the world at large with the likes of ‘Too Far Gone’ with drums a-kicking and much Hendrix style wailing over a chunka-chunk beat. The environment, famine, war, greed and human stupidity all get called out by an embittered Patlansky whose guitar playing holds your attention from explosive riffs and pinched squealing to left of field squelching chords in the main song, then a screaming and looping solo to make those hairs remaining on your now balding head take notice. Returning vocally after what is the song’s first solo there is a more resigned voice, as if weary of these ongoing situations, then the guitar again as a whirling organ enters the picture and song’s major riff repeats until the end as if emphasising the unrelenting madness of the world at large.

That there is an effective use of keyboards or studio effects throughout ‘Too Far Gone’ should not be ignored either, there modern aural approach offers a further dichotomy to the song’s theme and will be noticeable and relevant elsewhere on songs. As are some of the vocal harmonies applied. Both are techniques prevalent in mainstream pop much, albeit more so sampling and digital voice tunings, but they keep Patlansky concurrent musically. Vocally we can hear as evidence of this ‘Mayday’. While ostensibly about the rat race and the possibility of losing a loved one by pursuing it, and playing out like 60s girl band ballad with a man’s deep croon fronting it, it’s the repeated chorus line of “Mayday” akin to the nursery rhyme lullabies of  modern R ’n’ B that acts as ear worm. This doesn’t negate the song however, for the most part it is a slow 12 bar blues with sweet guitar phrases along the way, with lyrical solo of Hawaiian steel textures and sparkly turns of phrase. 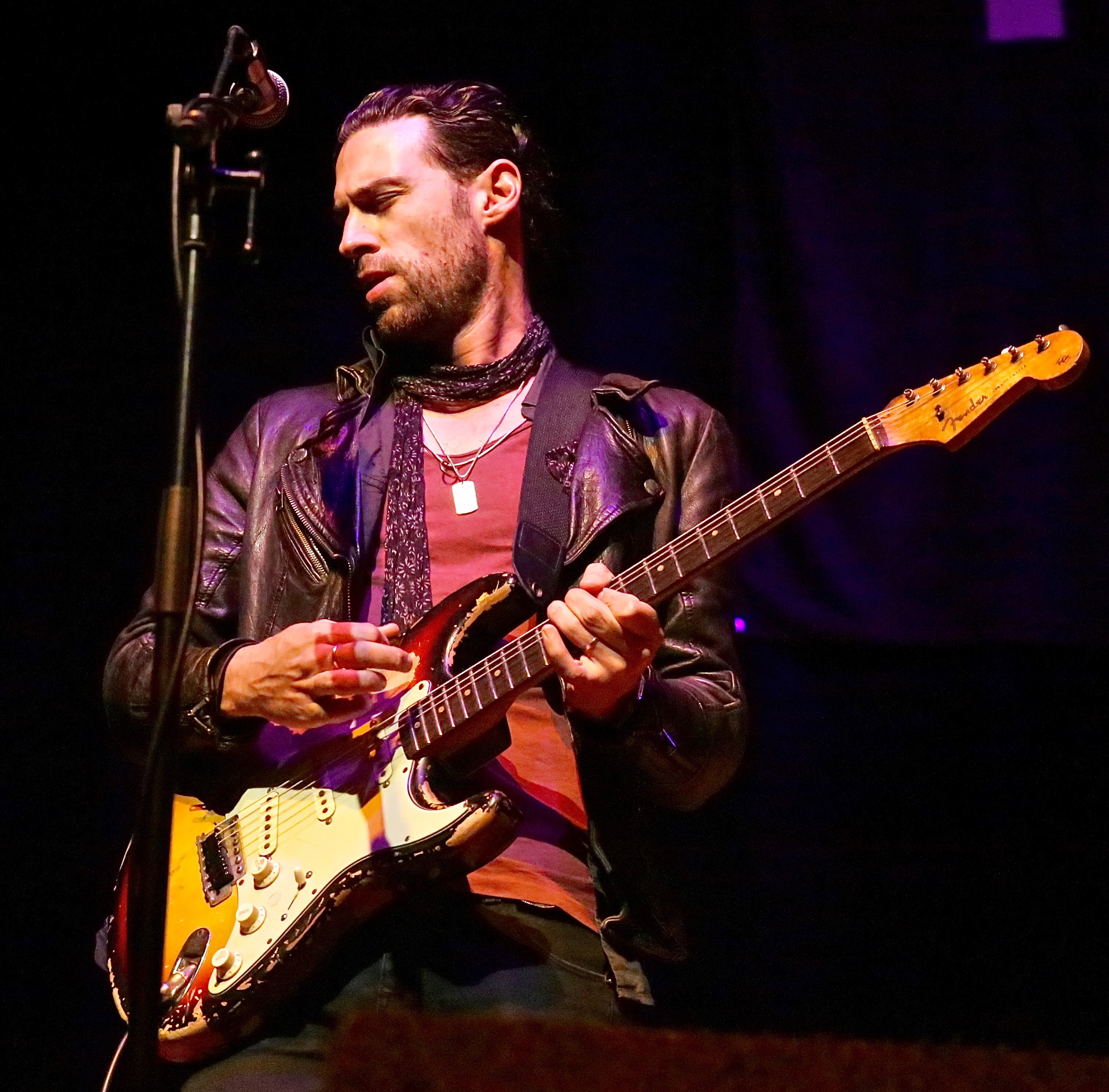 With a piano rolling over a layer of dirty fat funk rock and a megaphone delivered voice ‘iEyes’ starts off old school berating those too involved by modern technology to appreciate what’s there in front of their eyes, that it skips towards poppier sounds at one point feels mildly appropriate in terms of theme, but it’s the heavy funk bass and overall Parliament band groove that feeds Patlansky’s guitar solo what truly keeps my attention. We also get long soulful guitar work over organ and rhythm section in the slow Chicago blues opening of ‘Judge A Man’, the pull and swing of bended notes of particular note in this song where out of context it might come across as against as a rant against women, but is about those who don’t believe being a musician’s not a real job. Troubadours have ever been lumped in with vagabonds and vagrants.  Life on the road being an integral part of a musician’s life the soul rocking ‘Junket Man’ fills that role on this album

By contrast, ‘Never Long Enough is one of the album’s strongest tracks is about enjoying life’s simple pleasures, being at home alongside the woman in your life. Thus the dichotomies continue, but pleasurably so as a piano and organ section returns throughout the song, while a fuzzed-up guitar rides along a more laid back beat. His voice is wonderfully raw yet tender here and when harmonies are featured it feels like a couple conversing in agreement. That we also receive what can be regarded as a funky techno-flash guitar solo may sound out of place, but isn’t. Patlansky may play in the manner of Hendrix and Buddy Guy by way of Lenny Kravitiz type songs, but even if by osmosis there are often little inflections of inspiration that come from the realms of avant garde or jazz fusion, the kind of cluster of notes one might more naturally expect from Adrian Belew (Talking Heads, King Crimson) or the late Tommy Bolin (The James Gang, Deep Purple). Fear not though those of a more traditional preference, such embellishments pay service to the songs.

And the happy songs win out. ‘My Dear Boy’ strums along with chords reminiscent of Dylan’s ‘Like A Rolling Stone’ played by a mellow minded Hendrix. It’s upbeat, tuneful with some great harmony pop hooks that the likes of Take That would kill for. The bass guitar beating like a strong heart under Patlansky’s guitar solo; this one’s good make no mistake. You want more 90s pop sensibilities brought to bear on a rock record? Recall how All Saints covered The Red Hot Chilli Peppers and add a little rap, ease a pinched guitar refrain over some mid-paced blues rock and you’ve got ‘Shake The Cage’, then once you’re all settled wait for a solo from a guitar set on stun to burst free. The album ends with the single ‘Dog Day’, retooling the riff to classic ‘Rock ‘n’ Roll Hoochie Co’ for the modern age with a raucous rap gone hard and funky.

Perfection Kills mixes experimental and new sounds within a batch of strong songs, where fiery guitar work can also sit comfortably. An album of anger and sweetness in equal measures.