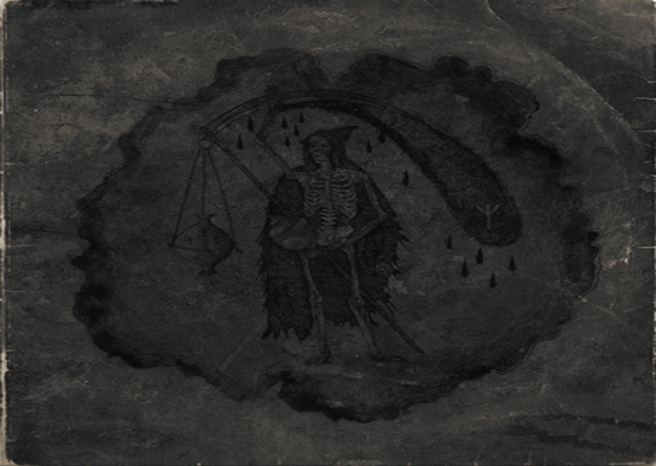 After staring at my laptop screen for about half an hour or so, I’ve come to the conclusion that this is a difficult album to describe succinctly. Very basically, it sounds like BWP have taken a hard look at Root Of All Evil and Sleep Paralysis and picked and chose the best sounding elements of each release and then neatly woven them together to create the rich tapestry that is Scatter The Ashes. That’s the basic version, a rich tapestry. There’s just so much to this album that trying to describe it is an almost mountainous task. Not that BWP don’t leave you wanting more.

There are familiar haunting echoes that are reminiscent of Sleep Paralysis and then there’s the soaring doom riffs that reek of mosh and ROAE. I read in an interview that they recorded this album with the intention of it sounding better live, whether or not they’ve succeeded entirely remains to be seen, but at their Bristol show with Terror, Fallen Apart sounded miles better played live than it did when they’d just released it as a single.

Scatter The Ashes as an album is certainly a benchmark for BWP, and it’s definitely their best release so far. If Sleep Paralysis hadn’t already made people sit up and pay attention to them, then this is the album that will do it.

In the 10 tracks BWP explore so much, from the slow intro Life Lines to the ridiculously fast paced Sins of Commitment that immediately breaks the calm straight after. The mosh ready Casket, 1348  and the relentlessly heavy Second Sight. What remains consistent throughout however is the quality of the music they’ve put out, and the obvious musicianship that the band have garnered over the years.

An excellent display is the ending and title track Scatter The Ashes voiced by none other than Basement’s Alex Fisher. The only way to describe it is eerie, and what really shines in STA is the guitar riffs that compliment Fisher’s voice brilliantly.

As a final word, you should be listening to this album, Ajay’s vocals and lyrics have improved once again, there are so many hooks and catchy sections to each song that you won’t be able to get it out of your head for months. You don’t have an excuse not to be paying attention to this band now, not one.