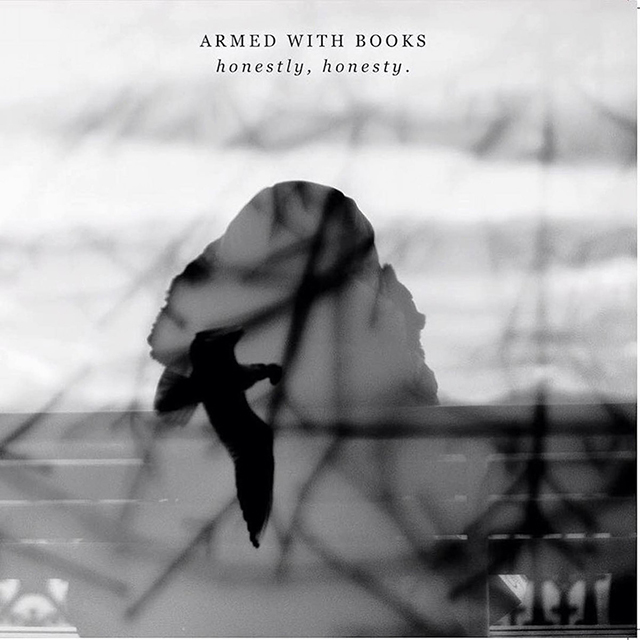 If you like your hardcore to headbutt you into submission, then Armed With Books are not the band for you. Instead, their latest EP Honestly, Honesty. is brimming with a tense, under the surface aggression that contrasts with the lighter touches of their guitars; that feeling turns this light music into something that feels like it is constantly verging on exploding.

It is the gentle, but more often moody, guitar tone that makes Armed With Books stand out. ‘Charlatan’ kicks things off softly with only the slight marching beat of the drums underneath suggesting that you aren’t in for a light walk through the forest, which is true but only to a certain extent. It’s only really the vocals which bring the anger here, and there’s an almost muddy feel to their production which clashes with that clearer guitar. It’s a style that is at its best on ‘Plain Sight’ where the moody riffs have a bit more urgency to them but is too much of a clash on tracks like ‘Fraying’.

Despite those problems, the vocals do deliver in other ways; there is a scorn to them that lets you know that, while Armed With Books might not sound quite as angry as others at first listen, this is still emotional hardcore of the ‘pissed-off’ variety. There is a lot of Ian MacKaye here, and it is nearly impossible to hear this album without his work popping into your head more than once. Whether that’s a good thing or not will of course entirely depend on your opinion of MacKaye and his work, but if you are going to draw inspiration from anyone, it might as well be the best.

Armed With Books aren’t perfect, and while there is pleasure in that simmering tension, none of the tracks on this EP really stand out. When Honestly, Honesty. is over and done with, you’re left with a feeling that you must have missed something, however, repeated listens don’t throw it up – there is no hook or idea which manages to worm its way into your head and demand you listen. To put it simply, there are no great songs here, and instead, you are served a hint of potential. That potential should be enough to make sure you keep your eye on them, but it is likely not enough to make them your next favourite band quite yet.