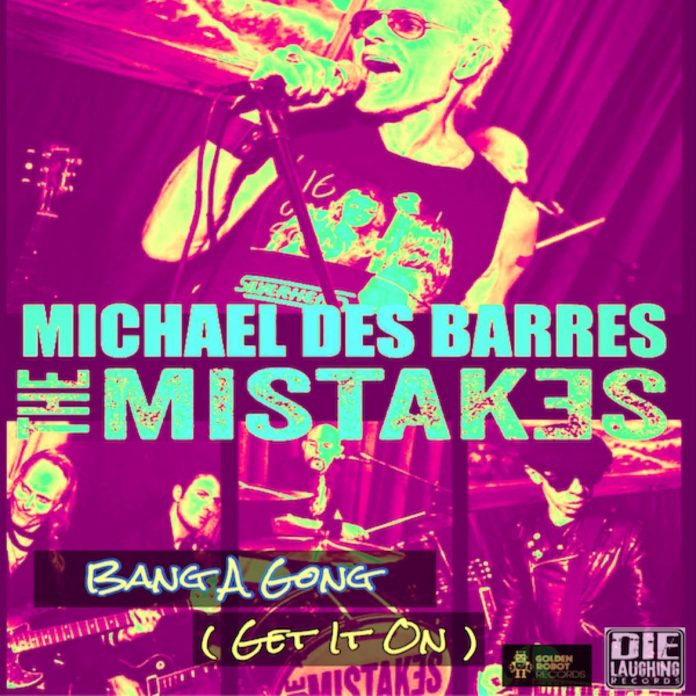 Michael Des Barres and The Mistakes sees the former Silverhead and Detective lead vocalist with a new band covering the record he sang at Live Aid as part of The Power Station.

This new band has released a new single in the form of ‘Get It On (Bang A Gong)’the Marc Bolan written T. Rex (and subsequently The Power Station) hit, that’s been issued on Die Laughing Records. A rather punkish version, but then Des Barres has always known how to deliver his message straight from the street.

Not bad for a titled English gentleman, the 26th Marquis Des Barres, to give him his official name. But Michael Des Barres has been plying his trade as both actor and singer for more decades than most of RAMzine’s readership has been alive…

Check out the classic 60s British movie To Sir With Love and he’s there peering out from under sunglasses, before appearing on TV cop shows of the day like Dixon of Dock Green and Z Cars. By the 80s he was in Miami Vice, Cagney & Lacey and famously MacGyver where he played the assassin Murdoc, and in the recent reboot playing his previous role’s mentor, Nicholas Hellman.

But, hey, this is an online version of a music magazine, and while he’s had more than his fair share of walk-on rock vocalist roles in films and TV, it’s the fact that after seeing him perform nude in a play during the 70s, no less than Andrew Lloyd Webber (before his knighthood, a title that means little to a marquis, eh) went and suggested he form a rock band.

How do you follow up being signed to the Guinness Book of Records’ World’s Loudest Band back in the 70s? You sign to the biggest band in the world’s record label, Led Zeppelin’s Swan Song. This was for Detective, a more mainstream hard rocking band that also featured former Steppenwolf guitarist Michael Monarch and original Yes keyboard player Tony Kaye.

Chequered Past came next, and the band name says it all. With The Sex Pistols’ Steve Jones on guitar, old bass playing mate Nigel Harrison bringing in fellow Blondie members Clem Burke (drums) and Frank Infante (guitar), plus former Todd Rundgren/Iggy Pop and future Tin Machine guitarist Tony Fox Sales. Loose, loud, and out of control they were punks playing metal. When Robert Palmer went walkabout from The Powerstation, Andy and John Taylor who’d seen Chequered Past when they supported Duran Duran brought Des Barres on board for their US tour and their Live Aid performance.

Somewhere in between all this he got together with Pamela Des Barres, former member of The GTOs and author of I’m With The Band: Confessions of a Groupie, married; and although subsequently divorcing appear to remain on good terms, appearing socially together since. Having led a full-on hedonistic rock and roll lifestyle he quit drugs in the 80s and co-founded the charity organisation Rock Against Drugs (R.A.D.). He also espouses eloquently on the subject of music weekday mornings on Sirius XM radio.

He has also released solo albums, fronted his own bands live, and with Holly Knight co-wrote ‘Obsession’ for Animotion that became a number one hit in 27 countries back in 1983. Now, with Michael Des Barres and The Mistakes he’s aiming to deliver the suave swagger of his street-smart rock to the millennials out there as much as committed fans of his several decades musical career. Plans call for more new music to be released through Die Laughing Records, including a live EP later this year.

You can stream/buy ‘Get It On (Bang A Gong)’ by clicking here and watch the video to it right here at RAMzine.

For a recent short interview that features moments of humorous irreverence and philosophically profound with Michael Des Barres click here.

If we’ve not given you enough background on this singer and actor’s six-decade career we advise you to check out the recently released documentary feature film Michael Des Barres: Who Do You Want Me To Be? available on Amazon Prime Video by clicking here.

You can listen to more Michael Des Barres music throughout his career on Spotify here.