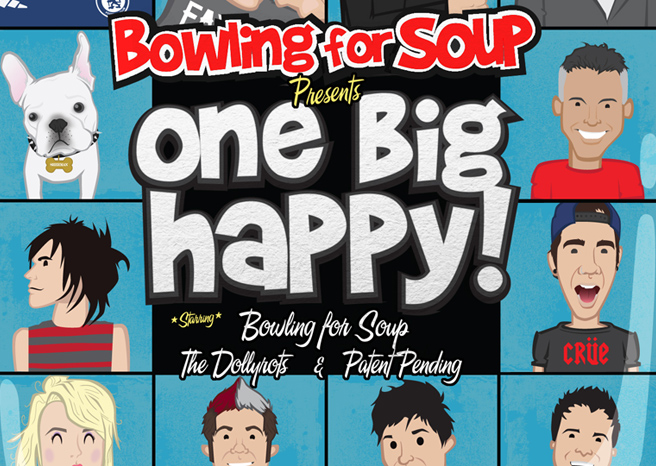 First off, I love pop-punk. I honestly do. It’s hilarious, and it’s happy. This new release from Bowling For Soup, The Dollyrots and Patent Pending, in which they all do covers of each others’ songs is one big mash-up of bouncy, American, fun-filled goodness. Each band does three tracks which were originally recorded by one of the other bands.

First up, let’s look at Bowling For Soup. With nearly two decades of experience under their belts, it is perhaps a little odd to consider as to why they would decide to do an album with two bands who have nowhere near as big a cult following as them. Nonetheless, the songs they do are right up their street, and they perform them with such gusto and typical brilliance that it’s not hard to wonder why they’ve amassed such a following, particularly back home in America.

The Dollyrots are equally marvellous; thankfully in pop-punk there is little to differentiate between female and male vocals, so the songs sound fairly similar to the original, although it is interesting to note that Kelly Ogden occasionally puts more power and conviction in her voice than the other singers on the album. Those large hairy men who refuse to listen to anything other than Dying Fetus and Necrophagist and wear camo shorts all day, every day even if it’s -20 outside, will say that she has an annoying voice, but honestly if you’re adverse to slightly irritating voices then maybe pop-punk isn’t the style for you.

Last but not least, Patent Pending have their own sound, complete with slightly gruffer, hoarser vocals, and yet fit right in with the rest of the acts on this chirpy bill. I don’t think there’s a band I know who could actually ruin ‘Shut Up and Smile’, it’s too bouncy and fun and full of sugar-sweet happiness to not be good. Their version of ‘Psycho In Love’ is almost as good as the original as well, big words I know.

All in all if you don’t like this album then fine. That’s honestly ok, American pop-punk isn’t for everyone (or as some will argue, for anyone) but if you’re already into these bands then this album will be an excellent addition to your collection; if you’re not then it’s also a great way to get into the genre, or be instantly repulsed that music can actually be this happy.