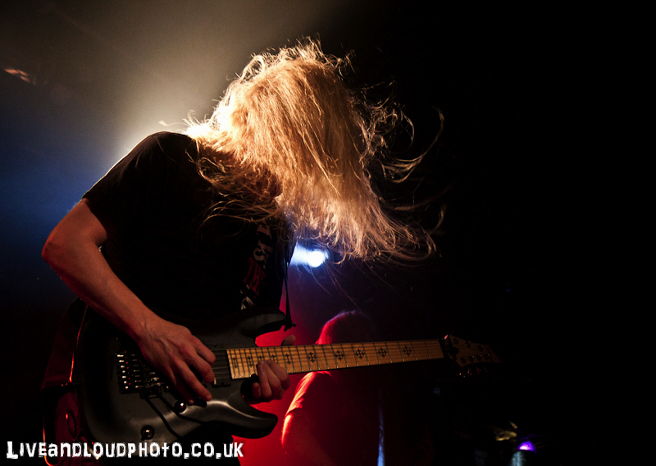 So lets start with Monuments. Instrumentally they are heavier than a sledgehammer of dark matter to the cranium but with that comes a perfectly melodic accompaniment.  What lets the London quintet down is vocalist Matt Rose’s seemingly crisis of faith.  Does he want to sing cleanly, with a gruff edge, scream or rap?  Is it still 2000 and people are trying to make the mash-up between genres work?  It’s been weeks and I’m still reeling at the fact that Rose tried to equal Fred Durst as the only white guys that has successfully pulled off rap-metal.  Just take that in and think if that really is something you want to be part of?

Jeff Loomis on the other hand is akin to watching Liverpool play football, however you could summarise most instrumental bands in the same way.  Sure Liverpool can pass it round and keep the ball for the majority of the match but unless there is that something there to finish it, an end product then the whole way they play is irrelevant.  Taking that thought and putting it into this scenario, Loomis plays fast, intricate guitar riffs and solos, but there is just a lack of something to sing along to.  Even when Joe Nurre steps up to sing there is that his screams (and not in the metalcore/subgenre sense of the word) don’t fill the void.

It probably isn’t helped by the sparse crowd in Sub 89 tonight creating little to no atmosphere at all.  What few people in on this cold night stand around as if either completely entranced or wondering what the hell they’ve let themselves in for?  You only realise at the end of each song that they are in awe of Loomis’ talent, and so they should be, the word virtuoso is somewhat degrading.  However an hour and a half of watching someone piss around on a guitar, seemingly to himself, just leaves me feeling redundant as I watch on.