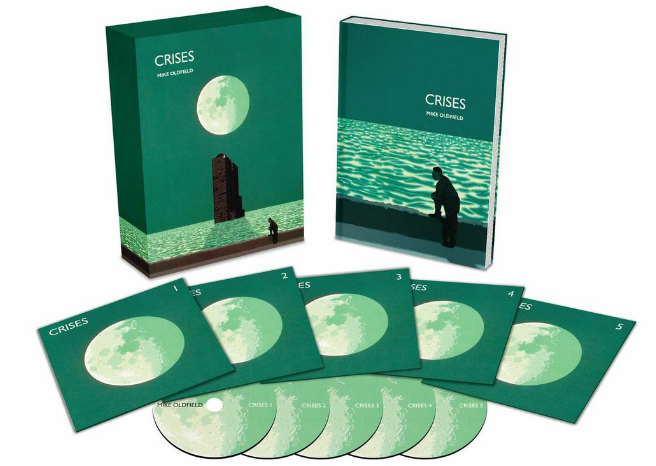 When Mike Oldfield played live at the opening ceremony of the 2012 Olympics Games in London, the obvious assumption was that canny businessmen would tap into all that free marketing to promote his back catalogue effortlessly, and for considerable financial gain. If they did I missed it. Rather, it has been business as usual since Mercury/Universal took over the creator of Tubular Bells’ back catalogue; systematically re-releasing his albums in chronological order with added extras such as different mixes, live and rare tracks, plus surround sound, and available in different formats.

Thus, in the later part of 2013, a couple of expanded versions of albums from his early eighties period surfaced. This was a period where Oldfield was increasingly moving away from the progressive rock scene and being presented as in vogue via more accessible pop rock sounds on Crises and especially Five Miles Out, bagging himself some hit singles into the bargain.

A talented teenage guitarist, in the sixties Oldfield was already playing acoustic folk music alongside his singing sister Sally, and developing a Hank Marvin sound in a beat group; it’s remarkable that both those aspects can still be heard when listening to his own work. Having joined former-Soft Machine Kevin Ayers’ band it lead to Oldfield becoming part of the extended Canterbury prog rock scene and developing links with the fledgling Virgin Records thanks to keyboard player/arranger David Bedford.  This, of course, resulted in 1973’s groundbreaking Tubular Bells, where Oldfield multi-track recorded the various instruments himself. It came at a time when hi-fi record players where advancing in leaps and bounds in terms of the aural quality and volume the speakers could illicit in the privacy of your own home, and as with other records of this nature (notably Pink Floyd’s Dark Side of the Moon) were used as demonstration pieces in music shops and department stores everywhere, resulting in even the most casual of purchasers becoming interested, and often ending up with a copy to show off their stereo system to visitors; being used as the theme tune to hit movie The Exorcist and winning a Grammy award for it in 1975 also naturally helped cement Oldfield’s reputation.

Hergest Ridge, Ommadawn and others followed, all moving up the album charts with Oldfield increasingly developing into areas that one day would be called world music. To the public at large however, he had gone the way of yesterday’s newspapers until, out of the blue, his electric guitar could be heard playing Portsmouth, the theme to children’s television show Blue Peter of all things, and reaching number three in the singles charts. And, as noted earlier, Moonlight Shadow and Shadow on the Wall would similarly become hit 45s, each unique in their own way, and coming from the period now under study. Oddly, Five Miles Out came out in 1982 and Crises in 1983, or at least in the UK, because the record company has chosen to reverse their ordering in the titling of this new collection, and insert live Wembley performances prior to ‘83s studio release. As a casual listener, that’s fair enough, but for the Mike Oldfield completist, and I daresay most people who will purchase this will be, it probably drives them mad.

Regardless, CD1’s opening track is the twenty minute long Crises as title track: a melodic keyboard intro followed by guitar motif, joined by another as they duet in slow harmony until the percussive sounds of glass smashing in the background presents discord and intimates the crises due to ensue. Musically it moves between differing tempos and processional themes, but lyrically I remain all at sea with what on earth the crisis being sung about is actually about. The vocalist on this is Oldfield himself as a number of songs are during this period, and when it’s not him Maggie Reilly is generally the featured person. Reilly sung Moonlight Shadow, a gay folk styled tune with big power chords on the chorus; reminding one of Steeleye Span who also had a couple of hit singles in this vein a few years previously. It’s a nice song and all that, but I have to say, personally, I could have done without all the variations of it offered on this collection. That’s not the case with Shadow on the Wall though, where Family vocalist Roger Chapman takes lead vocals – very much a rock song of light and shade, Chapman’s voice is not to everyone’s taste, some have compared it to a bleating sheep in pain, me I prefer Ray Charles in primal scream mode and like it for that very reason. Every version of the song I’ve heard on this collection has something different to offer, whether it’s an unplugged version with Oldfield on acoustic or the 12” single release where extended the electric six strings tease new sounds out, or Chapman reacting vocally to the sound created by Oldfield in studio or band when played live. Chapman and Reilly also duet on a live version of Family Man – The Hall & Oates hit single cover version being the one the general public are most aware of – where Reilly plays main song narrator with the lullaby nature of the verse’s narrative delivered in a dangerously coy manner while Chapman’s “Leave me alone” lines really do come across as those of a tortured man not wanting to stray from the wedding bed. I’ve read that Oldfield composed music for Princes Charles’ first wedding to Lady Diana Spencer, and similar themes were used on his albums during this period, though not Family Man itself I trust.

The live tracks span two CDS, featuring former Simon House, formerly of Hawkwind on electric violin and some powerhouse drumming from Simon Phillips. Initially the take on Tubular Bells took me some time to get used to, but there are nuances picked up and carried by the band that expand Oldfield’s original vision, plus Reilly’s inspired use of voice as a solo instrument itself keeps the listener perked and brings added humanity to the work, that she does this elsewhere on the studio albums too is quite refreshing rather than always hearing lyrical recitations.

The studio albums are indeed of their time aurally with Oldfield eschewing orchestrated themes and opting for the Oberheim and Fairlight synthesisers plus vocoders used on voices, these all being the rage back then. Fortunately, the processed sound of synth-drums that dates music of this period tends to be obliterated by the presence of the aforementioned Phillips and ELP’s Carl Palmer. Another famous prog personality can be heard on the co-write In High Places, from Crises, wherein Yes vocalist Jon Anderson’s angelic Yorkshire choirboy tones chime over Oldfield as the latter takes a Vangelis-style role.

Tracks like Jungle Gardenia reveal themselves as prequels to that whole Ibiza trip hop sound, but I’m not that keen on airbrushed Crises tracks like Foreign Affair or its apparent partner in crime, Crime of Passion. They’re MTV affairs and I was surprised to have gone on Youtube and not found a video of Maggie Reilly in a trench coat voyeuristically peering round corners on some faux private eye/romantic entanglement double entendre. But then I didn’t look hard. No, I much prefer her raucous sexual whooping on the live version of Taurus II as Oldfield’s guitar screams out heavy metal fashion before the band go hell for leather into intricate progressive time changes. The epic Taurus song cycle is in fact a great combination of Oldfield’s earlier musical themes dressed for the then modern times – Oldfield’s flamenco playing over Taurus 3 flirts flamboyantly and I wish it were longer, while the other parts (both studio versions from Five Miles Out and the Wembley band performance) feature melodies, pacing and instrumentation worth repeated listening for being less well known prog rock gems, the same can be said of Woodhenge/Incantations a live epic originally featured on an earlier studio record. There’s an awful lot of raucous electric guitar, perhaps too processed in places for modern tastes, but it’s inventive, intricate, and rather pleasantly unexpected. That stated, to avoid this whole collection simply becoming background muzack you need to listen with speakers (not headphones!) at a fairly good volume level and the bass turned up.

Those with preconceptions regarding Mike Oldfield’s music are unlikely to be shaken from their views by anything on the Crises and Five Miles Out Collectors Edition but for the curious, who only know him for Tubular Bells and the hit singles they may find themselves surprised by the diversity of work present here, in what was a changing musical landscape at the time. I fell into the latter camp, and while I’m not completely won over by all the tracks, there are many that will receive repeated listening, and a desire to check out some of his other albums.