Electric Guitars mount up and Freewheeler is the result 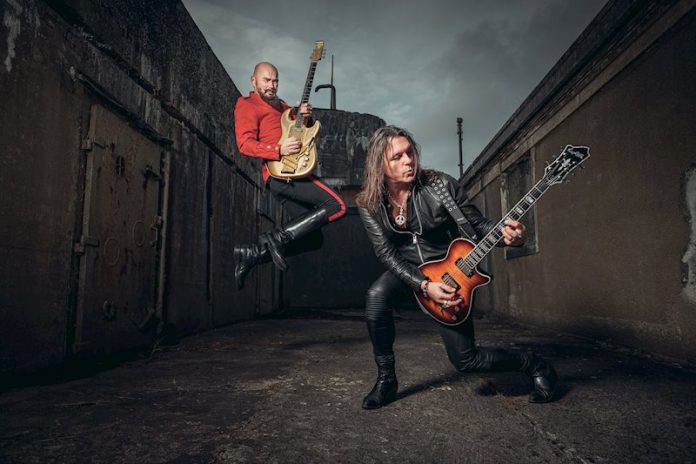 Naming your band after an essential constituent may seem obvious but Electric Guitars, a Danish band with three albums already under their belt, just say it like it is… guitar-driven rock fuelled by the twin guitar attack of Mika Vandborg who has worked with many artists (including Justin Hawkins) and Soren Andersen (of Glenn Hughes Band fame) backed more than ably by Peter Kjobsted on bass and Morten Hellborn on the drums.

Their latest release is called Freewheeler, and the cover too is a further statement of intent with the guitar-toting twosome riding serious-looking motorcycles on the Marvel style artwork. (They are not the 80s British or the Australian band, so search with ‘dk’ appended.)

The inevitable comparisons occur but, make no mistake, they are original: take ‘Dopamine’ for example; a punky, rocky, D-A-D like feel as they kick off the album in style. ‘Hot Blooded Woman’ may evoke Cheap Trick, but it has slightly more edge and less quirk. The Cheaps also seem to inspire the pandemic storied rocker, ‘Nervous Breakdown’.

On the other hand, they can do heavy and subtle… take the Priest like opening of ‘The Rainbow’ that morphs into a sing-a-long chorus anthem. Elsewhere, the title track has a touch of Thunder playing AC/DC, and is a classic in waiting; ‘Cut Loose’ channels Thin Lizzy and album closer, ‘Welcome History’ hits the distortion pedal for the heaviest song but keeping the lights and darks that seem to instinctively weave through their songs.

On first listen it is a ‘nothing new’ rock record: subsequent listens will unveil the craft and skill that imbues every track. Nothing new, new but original quality rock by quality players.

Freeway is released on 12th November on CD, digital and a choice of vinyl from Mighty Music.