Yes! alumni forge their own path with Arc of Life 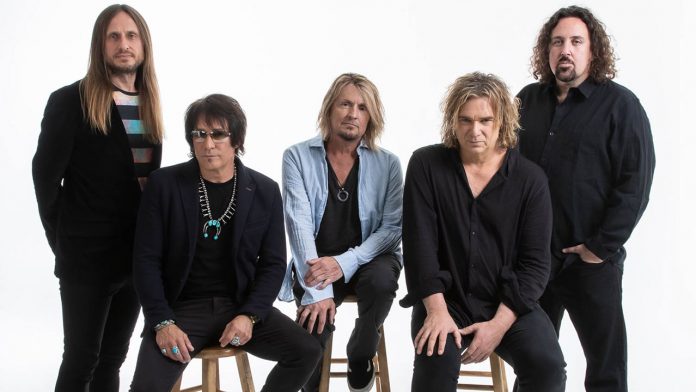 The term Arc of Life, as used by Chiropractors, signifies the “vital functions the natural back to front curve of the neck displays.” But in this context, Arc of Life is a spin-off from prog giants Yes, featuring three current members of the band and two others with close connections to the band. Jay Schellen is said to be the drum man in Yes, but I wonder whether someone’s told current incumbent Alan White, as he’s still listed on Yes’s website as being the official drummer.

The idea behind Arc of Life is in keeping with prog philosophy, which is to craft creative, challenging and ear-pleasing music that pushes boundaries. They use Yes as a point of reference, and listening to this album, the Yes connection is very clear as there are a lot of musical similarities that can be drawn. The music featured here consists of a series of precision, well-crafted songs which, says bass player Billy Sherwood, contains memorable melodies and lyrics taking the listener on a sonic adventure. Nobody ever says this about a Taylor Swift album!

Listening to the opening track, ‘Life has a Way,’ it immediately becomes apparent that singer Jon Davison sounds uncannily like ex-Yes vocalist, prog legend Jon Anderson. But there’re good uses of voices and harmony vocals on this track, and it’s this which is a key feature of the whole album, notably on tracks like ‘Until Further Notice’ and ‘Want to Know you Better.’ The Yes influence is noticeable on ‘Talking with Siri’ which sounds like it was written around the time of ‘Owner of a Lonely Heart.’ Billy Sherwood sings lead on ‘You make it Real,’ a love song almost oozing Schmaltz, and it’s hard to imagine the Yes line-up featuring Wakeman and Squire playing songs like this. Like many other fans who’ve listened to Yes for years, it’s hard to listen to ‘Just in Sight’ and, as good as Jon Davison is, not think of Jon Anderson.

The prog influence is apparent in the melody of ‘The Magic of it All,’ but it really comes to the fore in the nearly ten-minute epic, ‘Locked Down,’ with its undeniable Yes undercurrent, superb harmonies and some lovely guitar work from Jimmy Haun and is, for this scribe, the track of the album. They continue in this vein with ‘There For We Are,’ with its Jon Anderson mysticism of “we dream, therefore we are, we live, therefore we are. The album concludes with the topical ‘The End Game,’ with its reference to Insurrection and its “sending shock waves around the world”.

Is this a Yes album in disguise?  On the strength of this album, probably not. Arc of Life are their own entity. There’s plenty here to absorb the listener, and this is an album for not just prog fans to enjoy. The challenge for the Arc’s will be, as they’ve expressed a desire to, play ‘live’ and not sound like a Yes tribute act. But they have the chops to do it.