Ever-increasing the range of their fanbase, production value and technical prowess yet still staying true to what has helped make them an oddity in the extreme metal scene… Swedish melodic death metal outfit, Amon Amarth, bring their awe-inspiring set of Viking themed death metal to the Manchester Apollo along with fellow Swedes, Hypocrisy and Arch Enemy. 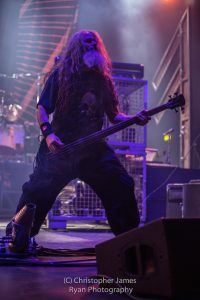 The first to play was Hypocrisy, a criminally underrated band headed by legendary producer, Peter Tagtgren, who has produced records for countless extreme metal bands including Amon Amarth themselves. Yet Hypocrisy still do not garner the respect and attention that they rightly deserve. Hypocrisy’s main lyrical theme is extraterrestrial beings with songs like ‘Fire in the Sky’ and ‘Adjusting the Sun’, that tell stories of otherworldly beings coming to earth and featuring harsh music that imparts imagery of hostile takeovers and dialogue between worlds.

The band continued their set with ‘Eraser’, a song that starts with a haunting bass intro from touring bassist Andre Skaug and continued on with their brand of mid-tempo melodeath before leading into ‘Warpath’. ‘Warpath’ is a rare faster track for the bands set which managed to get a reaction from a crowd, that ran the risk of being indifferent.

With an ethereal green glow accompanied by the Halt tape, a recording of a man telling the story of strange glowing lights near the Rendlesham Forest of Suffolk in 1980. The band ended their set by leading into ‘Roswell 47’, a slow and crushing track reminiscent of ‘Buried Dreams’ by Carcass. Much like the lights that took Whitley Strieber, they left Manchester far different from before they arrived.

Following shortly after were melodeath pioneers, Arch Enemy, a more straightforward and less narratively driven band than the rest of the bill. But it can be argued that they were the most technically skilled performers tonight as they featured Micheal Amott and Jeff Loomis as well as their somewhat controversial front woman, Alissa White-Gluz.

Arch Enemy began their set with the lead single from Will to Power, ‘The World is Yours’, a high energy rager with a newcomer-friendly chorus which will become a running theme for Arch Enemy’s set as well as Amon Amarth’s. Every band on the bill displays immense talent in writing heavier music while still being welcoming to new fans and it would be fair to call Arch Enemy the perfect introduction to extreme metal.

It’s strange to think of Arch Enemy as a band that can still fit in support slots given how many classic Angela Gossow era tracks they have, most of which were present in the set including ‘My Apocalypse’, ‘Ravenous’ and ‘Dead Bury Their Dead’, while still including the newer Alissa era songs that all still get an energised reaction from the crowd. Most notably being ‘As The Pages Burn’, a breakneck-paced song that takes the time for melodic choruses and harmonised guitar work that is welcoming to newer fans as well as appealing to die-hard fans from way back.

Amon Amarth’s set was covered by a curtain displaying only the word “Berserker” and remained there until the band, quite literally exploded on stage to the duelling guitar lines of ‘Raven’s Flight’; while blazing hot pyrotechnics, explosions and the sounds of harmonised guitars and the earth-shattering growl of frontman, Johan Hegg, fill the room. It takes very little time to notice just how much Amon Amarth have upped their game in terms of set design, so much so that it feels like a disservice to the band and fans to spoil all of it.

Amon Amarth’s main lyrical theme is Norse mythology and Viking warfare and they are somewhat underrated in terms of lyrical prowess, a sad side effect of being a death metal outfit. But their live show manages to express some of these stories with the assistance of basic props and characters including actors playing fully dressed Viking warriors.
‘Deceiver of the Gods‘ brings Loki to the stage, a surprisingly intimidating figure in the original Norse mythology and it’s with this guest appearance it’s clear that Amon Amarth could be next to take up the mantle that will eventually be left behind by Iron Maiden, both musically and in terms of set design.

The best way to describe Amon Amarth is “Arena Death Metal” in that they are accessible, melodic and feature choruses and lyrics that can be understood, which is where the greatest strength of Johan Hegg lies, he has the ability to both exude power and still be understood to even the most inexperienced of death metal fans. Tracks like and ‘Crack the Sky’ are perfect examples of this but perhaps it’s just people forming vague syllables as “it’s death metal, no one will know the difference” as Johan has said for so many years.

The latter part of the show seemed to have a narrative throughline, an element that most bands outside of prog would not attempt to include. Starting with foreboding track, ‘Predictions of War’, conjuring imagery of Viking warriors en route to battle in their longships and continuing on with ‘Shield Wall’ which included an appearance of Viking warriors on stage.
The story continues with ‘Guardians of Asgard’, an incredibly aggressive track that made the centre of the venue a difficult place to manoeuvre without violently slamming into someone and the story ends with ‘Raise Your Horns’, a reference to Vikings drinking horns raising their drinks after battle, presumably in Valhalla, as Johan downs an impressively sized pint with a hearty “Skol!”.

While the rest of the band left the building to have a pint next door, Jocke Wallgren treated the audience to a drum solo before leading the rest of the band returned to play ‘Pursuit of the Vikings’, a staple of the bands set and a fan favourite.
The final song was, unsurprisingly, ‘Twilight of the Thunder God’, a glorious balance of melody and power punctuated by a staple of Amon Amarth’s set; Johan holding aloft Mjolnir and slamming it to the ground with a stage engulfing burst of flames as the audience loses its collective mind before attacking the great serpent Jörmungandr that ominously looms over the band and it’s with this that the band conclude their set.

There are no other bands in extreme metal that put as much effort into presentation and pushing the boundaries of their set design than Amon Amarth and they need to be seen to be believed, even by people that are resistant to death metal as this is a perfect starting point.